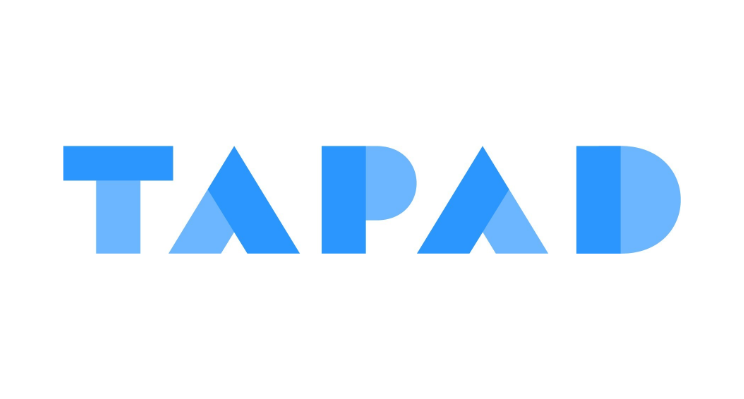 Our primary goal was to develop integrations using the Apache Spark.

We re-wrote the process of data retrieval, processing and distribution (ETL) in a streaming manner.

As an Adtech organization, Tapad had been using an Apache Spark cluster as an important element of the ETL process to distribute large data sets to be processed and distributed to 3rd parties. Our primary goal was to develop integrations using the above-mentioned Apache Spark.

While working on the platform we found issues with Spark resource management. We were also required to provide a different flow of integrations with various 3rd party services. Apache Spark didn’t meet our growing requirements, so we proposed a streaming architecture with Akka Streams.

We re-wrote the process of data retrieval, processing and distribution (ETL) in a streaming manner. This allowed us to reduce the costs, as we no longer needed a Spark cluster, with only a single machine required to handle the same or larger amount of data in a resource-safe manner.

Such approach was possible thanks to the reliable implementation of Reactive Manifesto in Akka Streams, meaning we introduced a solution that was: 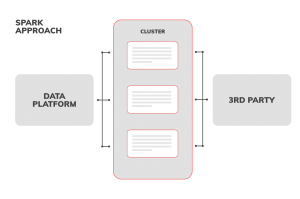 The Data Platform provides the data to the Spark cluster manager. Then, the data are spread across cluster nodes, so each node processes a subset of the whole dataset. After finished data processing tasks are finally send to the 3rd party to run.

Even though the processing time is not a critical factor in our case, given approach worked well only at the beginning with the initial 3rd party channel.

Soon it became clear there are more drawbacks than advantages:

• higher costs due to the need for spawning the cluster

• the data platform can produce very different amounts of data for each channel, from a few MB to tens of GB

• each node had to fit a subset of data into memory, sometimes just a few hundreds of MB, sometimes few GB

• it quickly becomes clear that some 3rd party channels can take data in parallel using HTTP calls, but some of them require to combine the whole data set into a single processed file. The cluster of nodes made it difficult to gather data back together effectively, combine and compress the data. 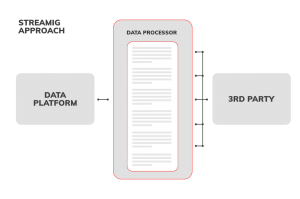 The Data Platform provides the data in a streaming manner, never exceeding the resources of the VM. Then, the data are processed by a single Data Processor, also in a resource safe, streaming way. Now it’s up to the implementation of the data processor to either push processed data to 3rd party in parallel (e.g., many parallel HTTP calls) or build a single file which later on is stored on GCS or S3 instance.

• possibility to use multiple cores to process the data

• can handle infinite amounts of data

After implementing the above-mentioned solution, we were able to achieve more efficient integrations and lower overall resource consumption. The former was achieved by replacing Apache Spark with Akka Streams and the latter – by executing various ETL “steps “ in parallel, which allowed the handling of virtually infinite streams of data.With these achievements, we are now limited mostly by third-party capabilities rather than our own. We have also decreased running costs, reduced the risk of experiencing runtime errors and gained greater control over error handling in general. What’s more, our solution to substitute Apache Spark with Akka Streams produced the results expected in our initial project assumptions, which means our approach to the problem was well-founded from the beginning.

• We started the project with three experienced Scala engineers, who were committed to Tapad business needsFaster processing (limited only by 3rd party capabilities)

• After the successful implementation of the proposed Stream Approach, our engineers have been involved into further exploration of one of Tapad’s core systems

Scalability has become one of the most important issues in Sumdog, as with every fast-developing company, due to the growing number of customers using the software, the evolution of existing features, as well as increasing requirements when it comes to adding new features.