Did you know that about 40% of what we do every day we do automatically? Almost half of our life is taken up by habits that we’ve formed over our lifetime. People are simple creatures, and if something works, why not stick with it?

What is problematic is that sometimes we just think that it works, but in reality, if you took a little time to look into your habits, you would see that they do not necessarily work in your favor.

During the last decade, habits have become a topic of interest in the scientific world. From Charles Duhigg’s “The Power of Habit” to James Clear’s “Atomic Habits,” we have been presented with several tools to improve them. But what makes habits worth the struggle?

Let me show you a few studies about the importance of habits and methods to make them work on your behalf.

What research says about the importance of habits

Slow and steady wins the race

In his longitudinal and cross-sectional studies, Daniel F. Chambliss looked into what makes swimmers excellent. By “excellence” Chambliss meant “consistent superiority of performance.”

Why did he decide to study swimmers? Because in sports, there are always obvious winners and losers in contrast to other fields of our lives.

His research has yielded some interesting results. What made winners the best among others wasn’t a matter of personality traits, quantitative changes in behavior, or even some special inner quality called “talent” or “natural ability.” Excellence was simply achieved by being consistent. That’s it.

Excellent results are a combination of numerous small skills, carefully drilled into a habit, and combined into a synthetic whole. It’s a confluence of repeating the same actions that seem ordinary and trivial, but when performed consistently, add up over time and let people achieve excellence.

His analysis suggests that people have overlooked a fundamental fact that may apply in other fields, such as in business, academia, and many others. Without mundane work, talent is a useless concept and will not let you achieve great things alone.

Without mundane work, talent is a useless concept and will not let you achieve great things alone.

Live your life like it’s a marathon, not a sprint

Angela Lee Duckworth is another researcher who looked into what makes a person successful in fields other than sport. After leaving her demanding job in consulting, she took on an even more challenging job and went to teach math in New York’s public schools.

It quickly became evident that the kids with the highest potential were not getting the best grades and the students who were top of their class were not necessarily the ones she expected.

She decided to research this precise topic at the University of Pennsylvania. She wanted to find the answer to the question of what the difference was between her students. But she also wanted to discover what differed between adults such as salespeople who were more successful than others and cadets at Military School who would either stay the course to the end of their military training or those who would eventually drop out.

The difference between them wasn’t IQ, temperament, personality, nor family income. It turned out that the main difference was grit.

Grit is defined as a combination of perseverance and passion for long-term goals. Sticking at something every day, not just for a week or a month, but for long enough, so the results will finally show up and stay.

It all comes down to everyday habits. It turns out it’s not the smartest who succeed and become the best – but the grittiest.

Steps you have to take to embrace the power of habits

Step 1 – Choosing the habits to change

Now that you are familiar with the importance of habits. Let me show you the steps that you can make them work on your behalf.

You should start re-evaluating your current habits by asking yourself one simple question:

In one year from now, what will I regret not doing today?

As simple as it is if you want to imagine what your future will be like, just take a look at your most recent past. It will be more or less the same If you don’t take any active steps to change it.

This part is crucial because, as James Clears, author of “Atomic Habit,” says, “many people think they lack motivation when what they lack is clarity.” If you want to see results, focus on the habits that affect the most critical areas of your life and take time to change them in the first place.

Many people think they lack motivation when what they really lack is clarity.

Be realistic with how much you can change in a certain period. Don’t try to reorganize your whole life in a month, because those changes just won’t stick.

James Clear has presented multiple strategies to change a habit. One of them is a method called habit stacking. He says that you should identify your current neutral habits and stack your new behavior on top of it.

An example of habit stacking is “Every day after brushing my teeth in the evening, I will do yoga.” It’s effective because you are already doing the first thing every day, so it will become the cue for a new habit. In other words – it will be used as a natural reminder for our brain to engage in a new habit.

No amount of watching motivational speakers will work if you don’t set a specific plan for actually doing it.

Another method is the implementation intention. This is pairing a habit with a specific time and location. An example of this is “I will do yoga every day at 7 pm in my living room”.

This method is based on a study published in the British Journal of Health Psychology. Researchers assigned 248 people into three groups – a control group, a motivation group (they were asked to read about the benefits of exercises), and an intention group (they also read the same article, but were also asked to make a specific plan when and where they would exercise). Additionally, they asked all of them to keep track of how often they exercised over a period of 2 weeks. 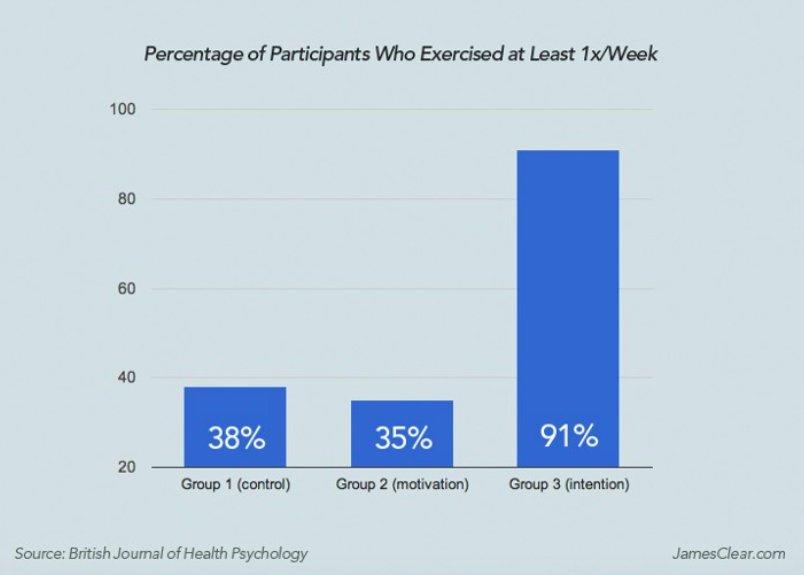 An unbelievable 91 percent of the intention group exercised at least once a week, while the control and the motivation groups reached slightly over 30 percent.

As the results of this study speak for themselves, it’s important to point out that this means that no amount of watching motivational speakers will work if you don’t set a specific plan for actually doing it.

One of the options when it comes to making your habits stick is using a habit tracker. If it isn’t an everyday habit, you can choose which days you want to engage in it. Then just mark a habit as done or undone.

It’s crucial to let yourself have a bad day sometimes. If you can’t engage in a habit, because you are sick and it wouldn’t be such a great idea to go to the gym, just mark it as 0 instead of undone not to lose your motivation.

Let go of black and white thinking, but try not to lose more than a day as it might be hard to engage in a habit again if you skip more days.

You can also use a habit tracker to write down long-term benefits of engaging in a chosen habit, so if you will be tired after work and just not feeling this gym thing, you will remember why you started.

Tracking your habits enables you to see when you stopped and let you figure out what is making you fail and what you can change in the future to avoid it.

Use this free habit tracker to reevaluate and change your habits

In the beginning, make it as easy as possible and increase the difficulty over time

We can’t say that motivation isn’t important, but it shouldn’t play a significant role when it comes to habits. The whole point of using habits is to make it as easy as possible. Willpower is like a muscle, and if you overuse it, it will be challenging to use it again.

It’s worth mentioning that it might be natural to want to challenge yourself, but letting ourselves go slow and then increasing difficulty over time will make you stick with your habits.

If you want to start running, start with 15 minutes, not an hour. If you want to meditate everyday, start with 2 minutes instead of 10. Only after it will get easy and natural for you to do it, increase difficulty.

It may feel like nothing, especially when we are used to instant gratification, but changing a little but consistently will make for tremendous results.

What about those activities we are already engaged in and would like to stop in order not to ruin our weight, waste our free time, and so on?

Bad habits are there for a reason, and they are somehow beneficial, even if you don’t realize it. That being said, bad habits should be replaced, not eliminated.

For example, you may be watching Netflix for hours, which some might consider a bad habit, but it lets you turn your mind off after work, so as a result, it is hard to give up. That habit can be replaced with anything that will let you chill out after work, but wouldn’t be considered a waste of time.

Take your time to figure out what benefit you get from your bad habit and what can fulfill the same function.

Another solution is to make these activities as unattractive as possible and highlight in writing the benefits of avoiding them.

It might seem rather obvious why avoiding a bad habit is right for you, but having it written down on paper is a totally different thing as you might use it on days when it doesn’t seem so obvious.

Make the environment work for you

There is no doubt that our environment shapes our behavior. So it’s important to create surroundings that will make doing the right thing easier.

You can do this by making seemingly small changes. For example, if you want to do yoga first thing in the morning, you might put your yoga mat near your bed. Or if you want to read before bed, put a book on your pillow.

This works with bad habits as well. Just eliminate any cue that causes a bad habit. Do you want to eat your favorite comfort food? Too bad there is none left in your house, and it would take you an hour to get more. Doesn’t seem so comforting anymore, does it?

Over time, if you adjust your environment, your habits will be associated with the entire surroundings, which will make them easier to stick to for longer.

The real purpose of taking the time to run through your habits and work on them is to solve your problems using as little energy and effort as possible. As human beings, we will naturally show a preference for the easiest option.

Whether it is learning a foreign or programming language, getting eight hours of sleep every night, or working out regularly, changing just 1% every day will make for tremendous results in the long run. So be sure that you plan everything out carefully and stick to it.

Psychology and finance graduate. I am responsible for the happiness of Scalac’s people and candidate experience. Language enthusiast, cyclist, yoga practitioner, and amateur bass player.

9 Of The Best Unknown Tools For Learning A New Language

You Ask, We Answer: The Most Common Questions About Payments And Contracts

We know that international payments, contracts, and arrangements can be tricky. We know that there are numerous questions concerning these topics too. Our goal today is to clarify everything once and for all so you will have a full understanding of how the system works.  And how it works at Scalac. #1 How do we […]